I sat wondering over my previous post 'Packing 7/14/13 – a sour thing, reactionary and jetlagged. My summer gave me a hobbit's 'second breakfast' of traveling to a new old place complete with awakened genetic memories, ghosts, that great British icon the Pub, and wonderful people.

'Carlisle! Why Carlisle?' they said when I told them where I traveled this summer. 'Well, why the hell not?' I shot back. Apparently, many Brits feel there is little to offer in Carlisle. It's a secret, so don't tell, but I descend from Border Reivers. Border Reivers are Scotsmen that have raided, rustled, plundered, and resisted encroaching British and English from the 13th to the 17th centuries. And, truth be known, their ancestors did similar since the iron age. My ancestors' castle, a brutish ugly tower built for war and only war, lies about 50 miles north of Birdoswald Roman fort near Carlisle. I was drawn to Carlisle much like my ancestors were. I felt their ghosts over that horizon.

Carlisle began as a Roman town called Luguvallium built to provide a market place to supply Legionnaires manning Hadrian's Wall and give them a place to relax and whore. It remained a center of Celtic activity even after the Romans left and the stone works fell into ruin. Celts, Scots, Anglo/Saxons, Vikings, Border Reivers, and finally the various English factions fought for control of the town for all the strategic reasons offered by its location.

Everything quaint and British in its architecture feasts the eyes. Cathedrals, churches, and castles are there offering the breath of ancient ghosts to thrill you. Everyone I met or dealt with was generous, gracious and helpful. The castle's gift shop clerk saw us hurry up to the shop 5 minutes after closing and allowed us 20 minutes to wander the fort alone. Even the local constable was generous and helpful. We got lost and flagged one down for directions. The handsome young man got out of his police van, lights flashing, and spent half an hour visiting and talking about everything under the sun. He even redirected us to get where we wanted to go. Let us not forget the grand comforts of the British pubs and the grand British pints of ale. Those comforts are food for a blog post all their own.

And, Carlisle has much and more to offer the weary traveler. B&Bs abound. Check closely at those along Warwick Street. Ours was called Cornerways. Steve, our gracious and helpful host, keeps a beautiful house and makes a great breakfast. Funny, I did not know pork and beans were a breakfast food. I sensed a lifestyle change coming at breakfast time here at home.

The real reason for making my way toward Carlisle was that genetic memory of my Border Reiver blood. I wanted to stroll Hadrian's Wall basking in the vistas looked upon by my ancestors. Like the haunted, cool, dark places of the castles and Cathedrals, the ghosts of that long Roman ruin raised the hackles and chilled the backs of my arms. Lonely, mighty, and finally futile, the shaped stone traces the contours of the regal hills of north Britain. Somehow, the Wall is both alien and at home in its windswept bed across the landscape. As the Romans did, I looked onto the hills to the north and noted this was where the Caesars decided to draw the ultimate limit of Empire.

Visiting the Roman fort of Birdoswald we stopped at the snack bar to buy food. Footsore and sweating, we looked to the sunny courtyard trying to find some shade. Only one of the picnic tables had space but a couple sat there. We asked to join them. We met Joost and Hilde. They lived in Holland and came to walk Hadrian's Wall. We talked for they were very friendly. Joost, it turns out, read every book I ever read. All of my favorites. He loved history. He loved archeology. Kindred spirits finding each other in a lost and ancient place.

I sat wondering over my previous post 'Packing 7/14/13 – a sour thing, reactionary and jetlagged. My summer gave me a hobbit's 'second breakfast' of traveling to a new old place complete with awakened genetic memories, ghosts, that great British icon the Pub, kindred spirits and kismet. 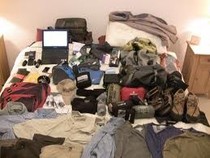 We got a slot to go. We began to plan where to go, what to see, what might be possible to crowd our days with dawn to midnight. We searched for airline prices. We searched for departure times. We searched for train fare, for public transportation prices and schedules. Hotels, B&Bs, rent houses, and hostels came next. Tourist traps and tours followed. We begged time off from bosses and arranged for some attention to our aging parents. We went clothes shopping and suitcase shopping. We selected, sorted, changed and rejected clothes and toiletries to take or leave behind. Money belts, notifying banks and credit card companies, and doing currency exchanges followed those things.

The anticipation wore down to ashes. I even put back the bottle of Viagra. Too much crap to make even that hope stay.

We waited. We passed through rude, burned out security personnel. We crowded into dirty, over-crowded, rudely attended airlines. We stood in ques with our jet lag. We stared bleary-eyed at old structures and ate indifferent food while drinking sour wine.

Now, we are home and I'm glad of only one thing. I have returned.

If you are old enough you may remember certain old movies of the genre 'boy meets girl, boy loses girl, boy gets girl'. Very often in the last scene the boy and girl look lovingly into each other's eyes, lean close until their mouths almost touch, and the screen explodes in bright and shining, black and white fireworks. Bluntly, most theatergoers jumped to the conclusion that the characters went forth to consummate (in some fashion) their relationship. The end.

And, very much like the pleasant drive home after the 4th of July celebration the other night, the skies do finally go dark and the land is shrouded with a smoky gunpowder haze. Not always a bad thing. The kiss happens, the fireworks happen, the consummation happens, and many times we get married.

'Some women marry for love, some for money, and some for a home. It is not known why men marry.' -Edgar Watson Howe

'We ruined each other by being together. We destroyed each other's dreams.' ― Kate Chisman

The first time I married, I was coming in from the cold. I was growing up. At 28, I wanted the wild days to be mostly over. No more living out of my car. No more eating one meal a day if lucky. Not more outside, no air-conditioned jobs. She was a pretty little thing. I think I interpreted what she represented as a marrying kind of love. That first marriage was a disaster. In the 21 months it lasted, I left her 9 times, she left me 7. All we did was argue and consummate.

'After all these years, I see that I was mistaken about Eve in the beginning; it is better to live outside the Garden with her than inside it without her.' ― Mark Twain

There may be a secret of a good marriage. I have not discovered it yet. That is despite the fact that my second marriage celebrated its thirtieth year last April. I won't lie. The fireworks come and go. That is not a bad thing. Forever fireworks won't even be background noise after a while. Too much of anything just makes one sore.

If there is a secret, I think it is in the partnership. Spouses must support one another's endeavors – their separate endeavors – as well as the mutual and shared endeavor of making the marriage. In the good times and the bad that partnership, that support, saw through.

I will share with you what is, to me, one of the best testaments to love and marriage you have never read. I stumbled across it when reading a war memoir. A war story. The author, John Masters, told his story of fighting the Japanese during World War Two. Going down that long and tragic road, he met his soul mate.

'I am a great deal older now. I have seen the failure of too many marriages, and warmed my hands before a few glowing successes, and in every case I have thought and examined and wondered, and never found any logic, for marriage is as mysterious as life or fire. I know only that there is no objective existence to it. It cannot be studied from the outside and conclusions drawn, for it lives only inside itself, and what is presented to the observer or the listener bears only the relationship of a distorted shadow to the reality inside. There is only marriage, which is a mystical union, and when the partners to it cease to know that they are one flesh, when the mystical sense goes, there is no marriage. There is instead a practical problem, with a hundred factors pressing on the mind and the emotions. What to do? To pretend, to fight? To stay, to go. To deaden the senses or quicken them? To think of the children, who must be loved, or think of the mystery, which must be refound, with which there is no love? To die, to live?

All this will be part of the consciousness of some of my readers, to others will be strange, not to be understood, perhaps sinful. In any case, there is no more explaining to be done. Nor can I say more about love for here, too, you know what you know. We loved, and there's an end.'

- John Masters, 'The Road Past Mandalay'

-
One last, added, list of advice not my own:

'Happily ever after is not a fairy tale. It's a choice.'

'A happy marriage is the union of two good forgivers.'

'A long-lasting marriage is built by two people who believe in -and live by- the solemn promise they made.'